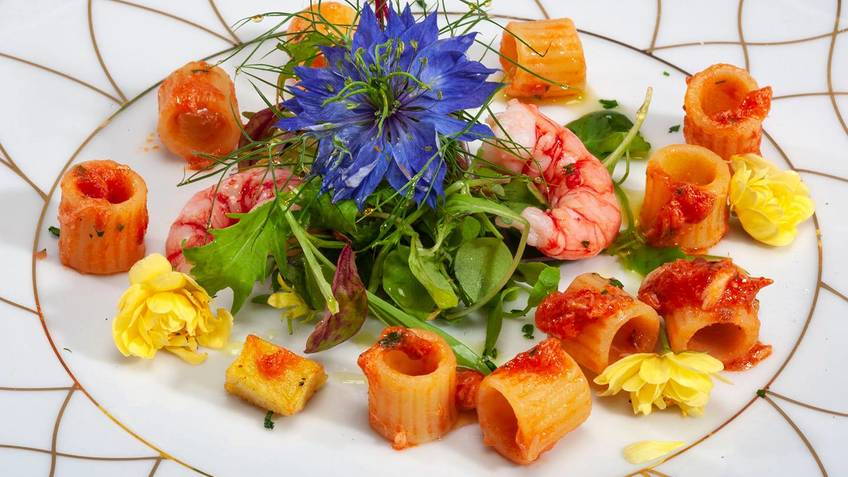 "La Caravella" was first opened in 1959, and is today one of the most important and well-known restaurant in the south of Italy. Situated in the centre of Amalfi, where the history of the Maritime Republic can be felt. It is infact situated next to the Ancient Arsenals, in a building of the 1100, which was the home of the Piccolomini family, feudatories of the Duchy of Amalfi. The aisle of the building, today allocated to the "La Caravella" was in the Renaissance the archive of the Duchy.

In the sixties, due to the high level of quality achieved among the first restaurants of the South,"La Caravella" was awarded the Michelin Guide Star. The cuisine of the "La Caravella" is based on Eastern and Western, Sea and Land products, it rediscovers the old recipes of Amalfi, representing them in a more fantastic version, exalting the senses and the tastes of the territory.

The elegant and well kept environment, houses a rich collection of ceramics of the most famous Masters of Vietri since 1800 to nowadays; a rich synergy of Art, Culture and Gastronomy. The Dipino Family, jealous, and with scrupulous care treasure this sanctuary of good cuisine, by passing down from generation to generation, their secrets and inventions always open to novelties.

TripAdvisor Traveler Rating Based on 441 recensioni »

Quite below average expectation

Quite below average expectation for a one Michelin stared restaurant. We got the tasting menu with tasting local wine. Wine was very good. Food had no punch. Probably a second generation issue, the... more »

We had a terrible time at La Caravella - the food was mediocre at best and the service was appalling. We were treated as if we were children and overall the staff was very impersonal and rude... more »

We ate here on one of our four nights in Amalfi and had a lovely evening. The service is the best we experienced here and the food was delicious. The restaurant does have a high-end feel (with prices... more »

"La Caravella" restaurant is located in the centre of Amalfi, the capital city of the historic Maritime Republic.