Known as the "Balcony of the Amalfi Coast"

Unlike the majority of towns on Italy's Amalfi Coast, Ravello is not located by the sea. To get to this beautiful cliff-top town you'll need to leave the SS163 between Amalfi and Minori and head in and upland for about 3 kilometers.

How to get to Ravello

You can reach Ravello by making your way down the Chiunzi pass, which you can access from the A3 motorway from Naples, exiting at Angri. Consider that it takes about 90 minutes to reach Ravello from Naples and Salerno; times can vary dramatically depending upon traffic. In addition, the Sita coach company operates a bus service to Ravello from Amalfi.

Driving times from other locations in Campania:

For more detailed directions and information on how to get from the Naples airport to Ravello: How to get to the Amalfi Coast

The Italian village of Ravello is one of the quietest along the Amalfi Coast, set a bit away from the seaside and the busy beaches. Though equally lovely, Ravello is never as crowded as Positano or Amalfi, especially in the evening when most of the day-trippers have left and the streets are refreshingly empty.

Known as the "City of Music", Ravello has always been a favorite retreat for artists and intellectuals looking for inspiration from the sweeping vistas far from the bustle of the coastline.

Over the past two centuries, musicians and composers like Wagner, Grieg, Rostropovich, Toscanini, and Bernstein have taken refuge here, as have artists like Escher, Turner, and Mirò and writers from Lawrence and Forster to Virginia Wolf.

It comes as no surprise that this sleepy village hosts important cultural events like the Ravello Festival and chamber concerts organized by the Ravello Concert Society.

The Most Spectacular Views in Ravello

Wonderfully aristocratic, breathtakingly beautiful, Ravello sits above the Amalfi Coast's seaside fishing villages, perched on a great spur of rock, some 350 meters above the Mediterranean Sea.

Constructed on the site of a settlement believed to have been built by a Roman colony fleeing from the barbarian invasions, Ravello became the elected refuge of a group of noble families from Amalfi who had rebelled against the authority of the Doge in the 9th century.

Ravello soon prospered thanks to the production of the town's "Celendra" wool and, in the 11th century, attempted to dissolve its ties with the Maritime Republic of Amalfi by nominating its own Duke.

The town's decline coincided with the Norman conquest and over the ensuing centuries the population of Ravello, which in the 12th century had been circa 25,000, diminished to such an extent that in 1800 the town was aggregated with the diocese of Amalfi.

However drastic, its change in fortunes failed to impair the town's charm and, if anything, conserved it, making Ravello the chosen destination of inspiration-seeking intellectuals, artists, and celebrities from every corner of the globe. 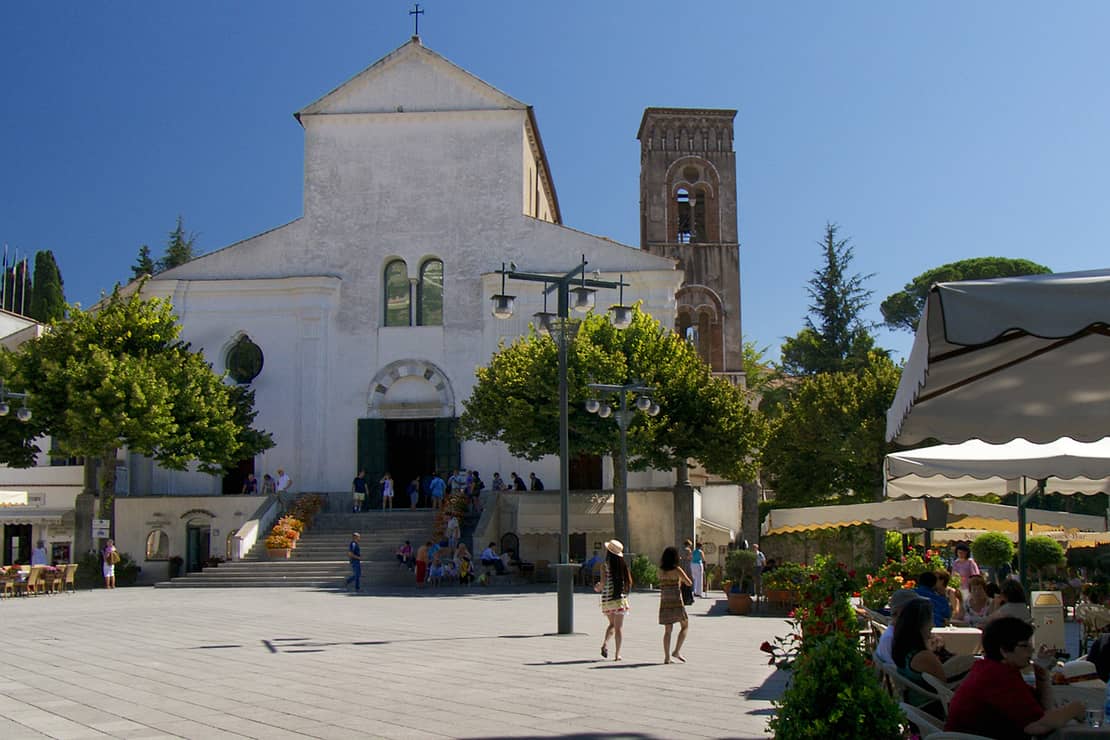 The Duomo, erected in 1086, dominates Piazza Vescovado with its splendid, triple-arched marble portal and magnificent bronze door created in 1179 by Parisano da Trani.

The cathedral's museum is more than worthy of a visit if only to admire the splendid marble bust of Sigligaida Rufolo, widely considered to be one of the most beautiful works of 13th-century art. 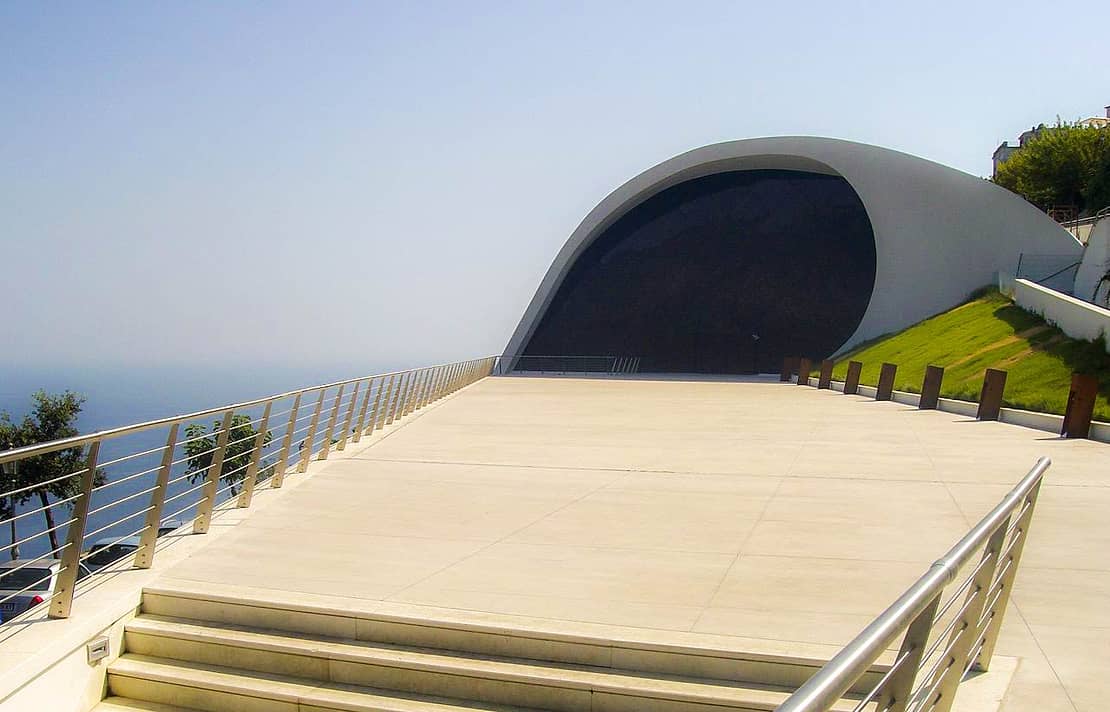 A cultural bridge between the past and future, Ravello provides the setting for the controversial Auditorium by Oscar Niemeyer, an international design legend.
A powerful work of modern architecture bang in the heart of a UNESCO World Heritage Site, the 400 seat auditorium has been likened to a sheet of white paper blowing in the wind. 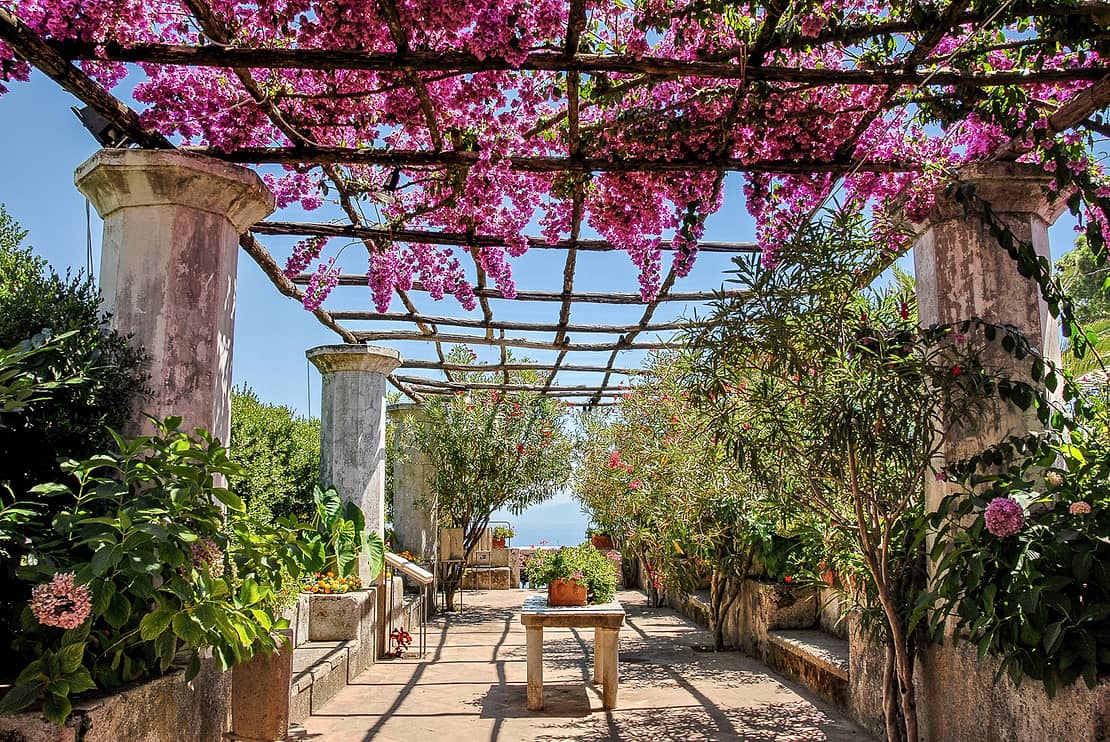 The tower which faces on to Piazza del Vescovado originally served as a watchtower for Villa Rufolo, one of the most important architectural masterpieces in southern Italy which has contributed to Ravello's worldwide fame.

The villa was constructed in the latter half of the 13th century by the powerful Rufolo family.

Both Moorish and Norman influences can be seen in the towers and cloisters, the latter characterized by a double order of loggias and pointed arches.

The grounds of the villa are as famous as the building itself.

The magnificent cliff-edge terrace offers unforgettable sea views and is the venue for the Ravello music festival known as the Wagner Festival'''.

Wagner stayed in Villa Rufolo in 1880, whilst composing his Parsifal, and was so enamored by the place that he declared "the magic garden of Klingsor has been found". 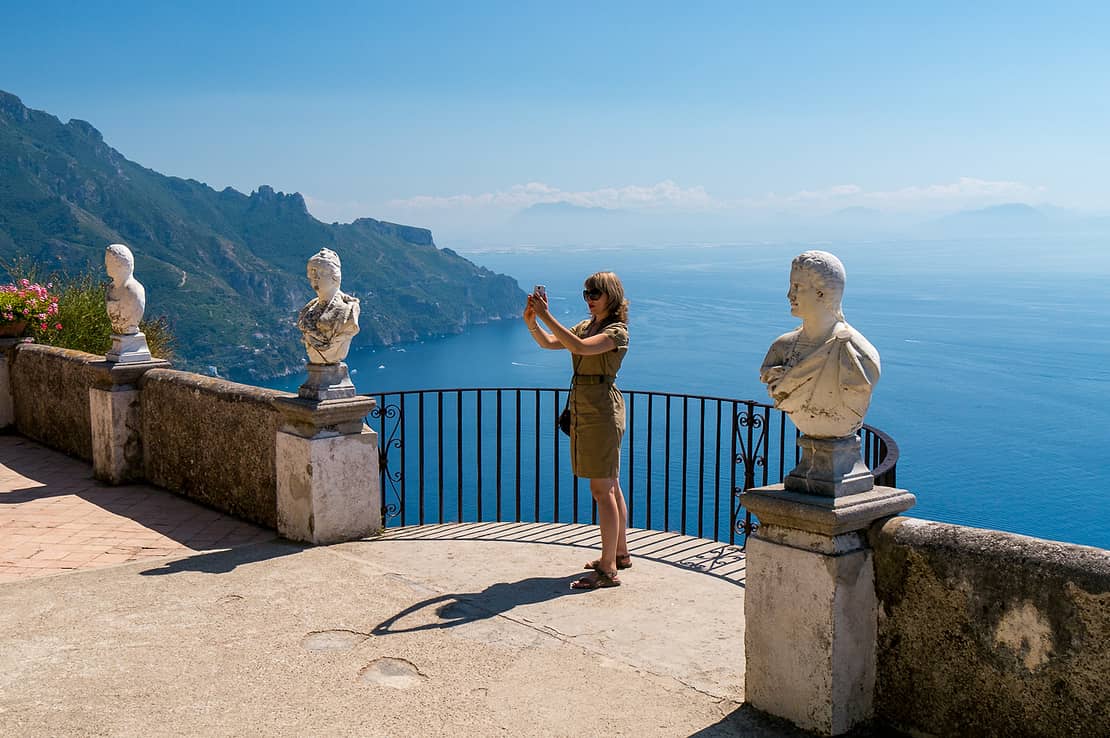 Villa Cimbrone, is the visionary work of Lord William Beckett who, in 1904, purchased what was then a long-abandoned farmhouse and transformed it into a splendid residence using an eclectic mix of architectural styles and eras, archeological relics, and souvenirs of his extensive travels.

These luxuriant Ravello gardens are home to many rare botanic species, but also statues, fountains, temples and artificial grottos, all of which reflect the passion for antiquity so in vogue at the time of its construction.

The paths which traverse the garden culminate in the Infinity Terrace" and one of the most beautiful views in the world.

More Things to Do in Ravello:

Where to Eat in Ravello

Gourmet dinner: Ristorante Rossellinis in Palazzo Avino, an elegant and romantic restaurant with Michelin-starred dishes served overlooking the Amalfi Coast. Lunch in the town center: Ristorante Vittoria, an understated restaurant with stone vaults and vintage photos decorating the walls. There is also a small garden for outdoor dining. For pizza: Da Mimì, a traditional pizzeria set directly above the water with a large outdoor dining space where you can enjoy an authentic pizza napolitana topped with area specialties like anchovies from Cetara or zucchini “alla Nerano” , inspired by the famous spaghetti dish.

Where to Sleep in Ravello?

Ravello has been a favorite stop for travelers since the Grand Tour and is home to a number of prestigious luxury hotels. If you're looking for a charming inn, in Castiglione di Ravello you can book at Villa San Michele, a 3-star hotel with a private beach and gourmet restaurant. Villa Principessa, is a luxury property with refined interiors, an infinity pool, and private beach access. If you'd like to sleep at the landmark Villa Cimbrone, preferred bolthole for English aristocracy for centuries, contact Hotel Villa Cimbrone, one of the most panoramic 5-star hotels on the entire Amalfi Coast.

Village with a wealth of craft traditions, characteristic architecture, and a small beach.

Explore the smallest village in Italy just steps from the bustling town of Amalfi.

The entire coast is named for this seaside jewel, land of maritime traditions and tourism.

The largest beach of the Amalfi Coast and centuries of art works.

An enchanting coastal village, much loved by in-the-know visitors.