Positano, like the legendary Sirens of Li Galli, never fails to seduce

Seen from the sea, Positano is set in an impressive vertical panorama of colors: the green of the Monti Lattari; the white, pink, and yellow of the Mediterranean houses; the silvery grey of its pebble beaches; and the blue of the sea.

How to get to Positano

If you're driving from the west, Positano is the first town you'll come across on the Amalfi Coast.
The town is approximately a 75-minute drive from Naples and 20 minutes from Sorrento. You can also get to Positano via one of the buses run by the Sita coach company, and in the summer months, by boat.

For more detailed information: How to get to the Amalfi Coast

The history of Positano

The ancient Romans built a number of sumptuous villas on the coast of Positano, the ruins of which can be seen in the vicinity of the Church dell'Assunta.
It is believed that the town was founded in the 9th century around a Benedictine abbey.
The town grew considerably following the arrival of inhabitants from Paestum, who were fleeing Saracen incursions.

After it was pillaged by Pisa in 1268, Positano increased its defenses, becoming similar to its powerful neighbor, Amalfi, with steep narrow roads, massive fortified walls, and a series of all-important watch towers. 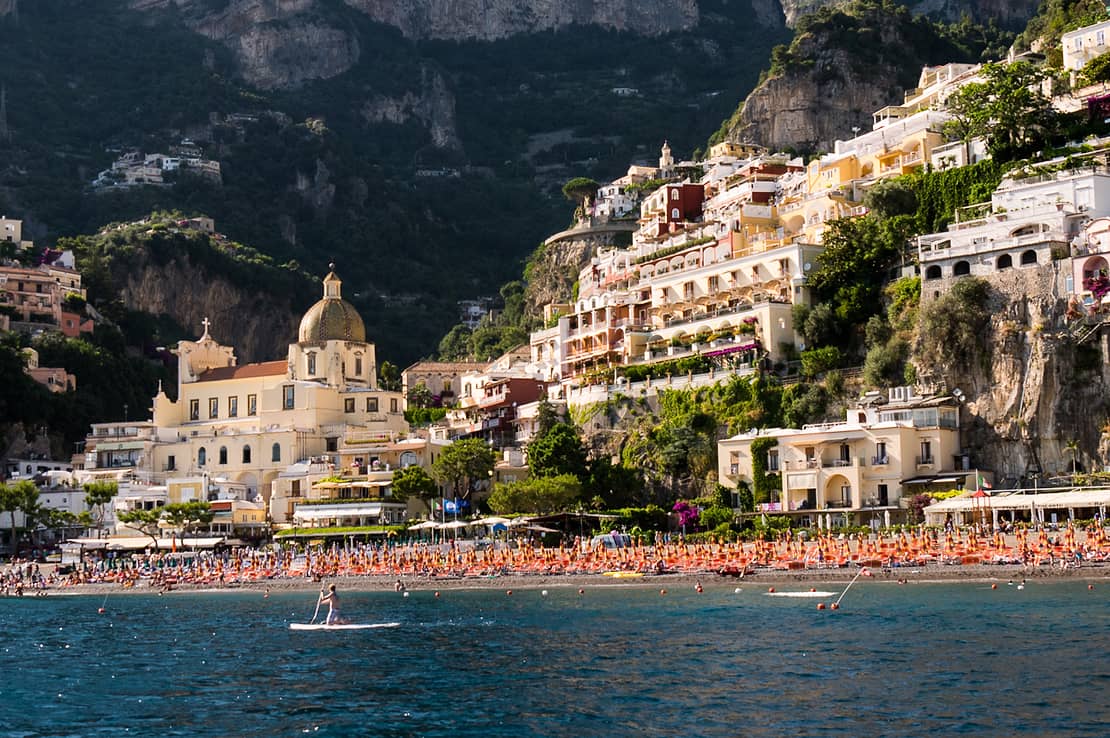 The majolica-tiled dome of the Collegiate Church of Santa Maria Assunta can be seen from every corner of the town. A Byzantine-inspired icon of a Black Madonna dating back to the 18th century is conserved inside the church.

The name Positano is linked to a legend
In ancient times, a Turkish boat became beached just off the shores of what has since come to be known as Positano. Aboard the ship was a painting of the Virgin Mary. Legend has it that the captain heard the painting whisper "posa, posa" ('set me down, set me down') and he obediently threw the image into the sea. Miraculously, the grounded ship floated free and was saved. The locals built a church on the spot where the painting washed ashore, interpreting the episode as a sign that the Virgin had chosen their town as a resting place.

The fortunes of Positano, like its roads, have continually risen and fallen. In 1343 the town was destroyed by a terrible tsunami, and in the 15th century it was victim to continual attacks by Ottoman pirates.
In the 18th century, Positano enjoyed a period of prosperity as a major port and trading hub. Following the unification of Italy and the opening of a number of new commercial routes, the town's importance began to decline. In just a few decades it was reduced to little more than a humble fishing village, and many of the inhabitants decided to emigrate to the United States.

Multi-Day Tours of the Amalfi Coast

A museum visit to explore the history of Positano

Discover the ancient history of Positano by visiting the local Museo Archeologico Romano. It was recently inaugurated on the site where an ancient Roman villa once stood, beneath the oratory of the Church of the SS. Maria Assunta in Piazza Flavio Gioia 7. Visitors can admire fragments of the original architecture and decorations to learn about Positano's Roman history, with the help of multimedia displays that explain the ruins more in depth. Seasonally the museum is open from 9 am to 8:30 pm April 11 to October 31, and from 10 am to 4 pm November 1 to April 10. You can also take a 30-minute guided tour for groups of up to 10. Tickets cost 15 euros per person and payment is by credit or debit card only.

Positano once more began to flourish with the construction of the SS163 road, a much-needed alternative to the mountain paths that had until then formed the only link between the Amalfi Coast and the rest of Italy.

The new road united the town with Sorrento and Naples and allowed the first tourists to reach Positano. These were no ordinary tourists, but rather an elite group of travelers comprised of intellectuals, artists, and celebrities who, from the early 20th century onwards, elected Positano and Ravello as their preferred holiday resorts.

Escher, Steinbeck, Picasso, Klee, Zeffirelli and Liz Taylor: the list of artists who have fallen helplessly in love with the beauty of Positano's land and seascapes is endless. "Willing prisoners of a legendary landscape," as they used to define themselves.

The beaches of Positano 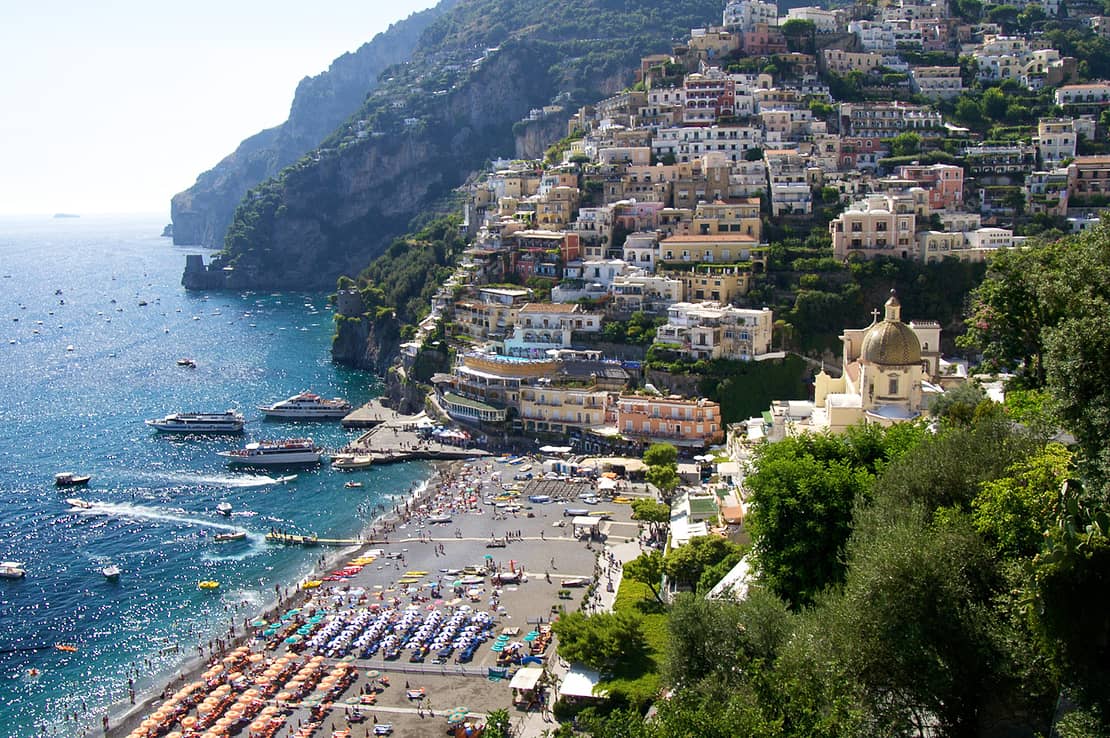 Spiaggia Grande is the heart of Positano's waterfront. Spanning 300 meters, this beach is one of the largest on the Amalfi Coast, as well as one of the most glamorous, attracting a fashionable crowd of artists, actors, and celebrities.
Those looking for a more peaceful spot in which to bask in the Mediterranean sun will love Positano's Fornillo beach, which can be reached via a footpath that sets off from Spiaggia Grande.

Take a dip in the sea, far from everything and everyone
Based on the beach of Marina Grande, Positano's "sea taxi service" operates a fleet of small boats transporting visitors to the paradisiacal little bays, such as Remmese, Clavel, and Cavone, which can only be accessed from the sea.

After a swim, holidaymakers who would like to enjoy some of the Amalfi Coast's delicious fish should ask to be taken to Laurito beach, home of the waterfront "Da Adolfo" restaurant.

All about beaches in Positano

Li Galli, the island of Sirens 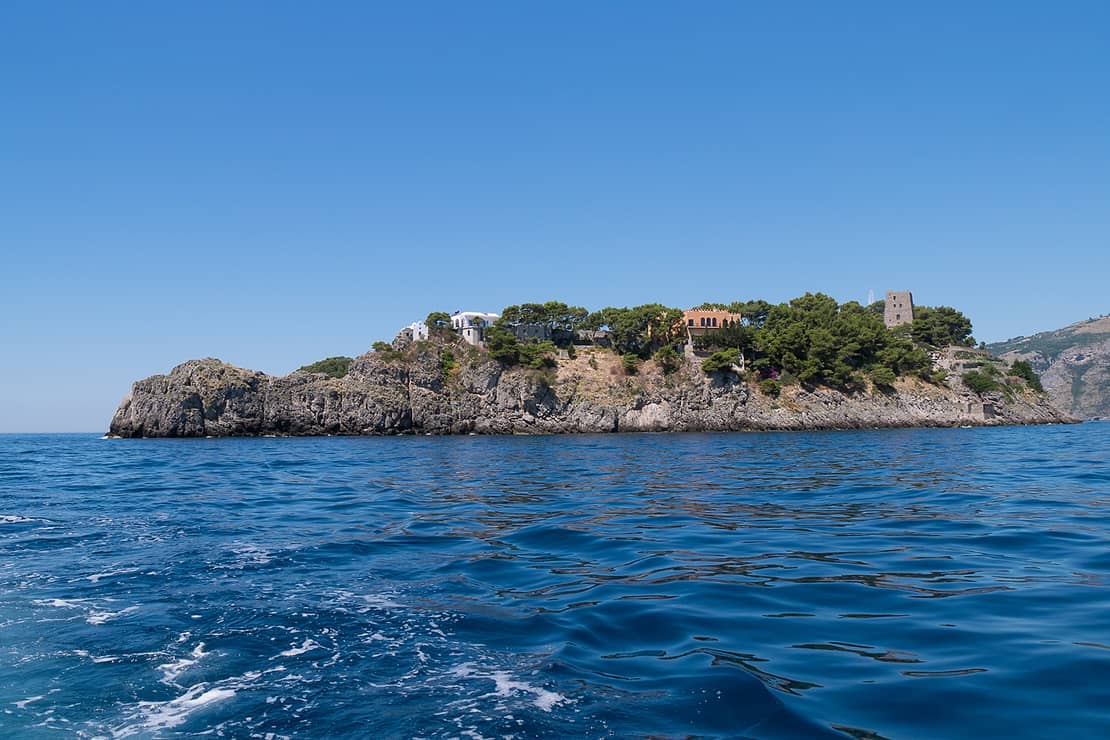 Legend has it that the three islets of Li Galli, set just off the shores of Positano and often referred to as the "Sirenuse," were inhabited by Sirens who attempted to seduce with their song all those who sailed nearby.

Perhaps the most famous of those to have been enchanted by the islets' mysterious beauty is the ballet dancer Rudolf Nureyev, who spent the last years of his life here. 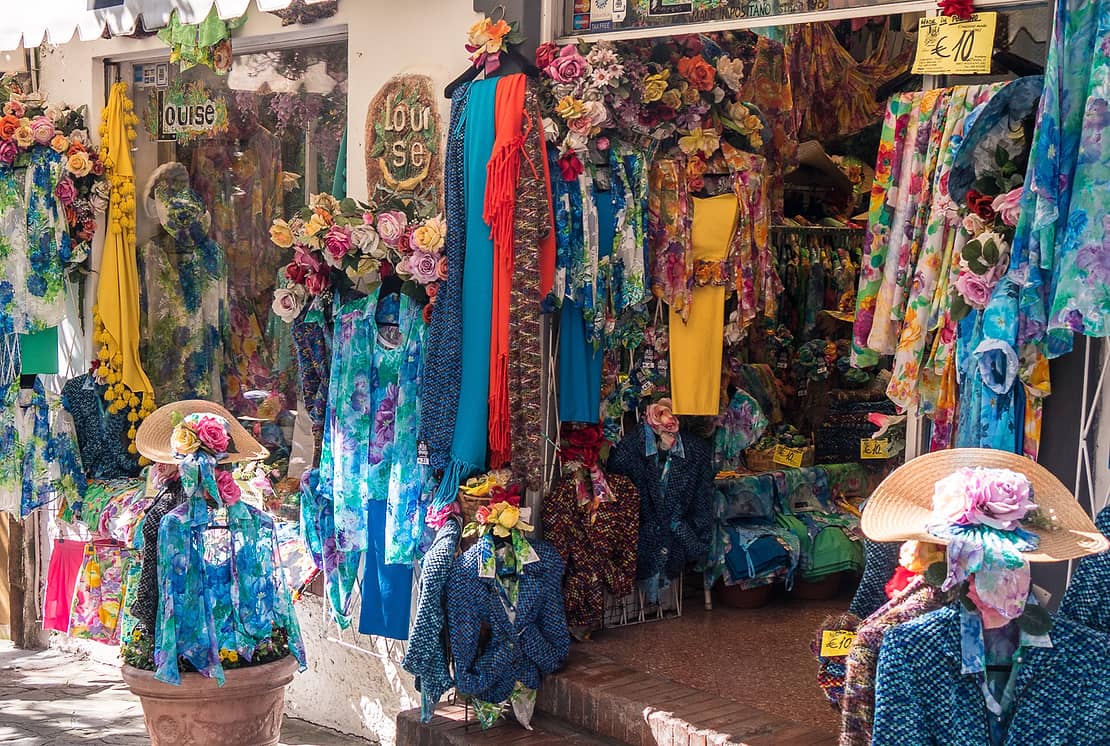 Shopping on the Amalfi Coast

Exploring the area around Positano

If you'd like to explore further afield after a few hours lazing in the sun, shopping in Positano's colorful boutiques, and enjoying delizia al limone on the terrace of the Zagara restaurant, then you should take one of the paths leading to the tiny mountain outposts above Positano. 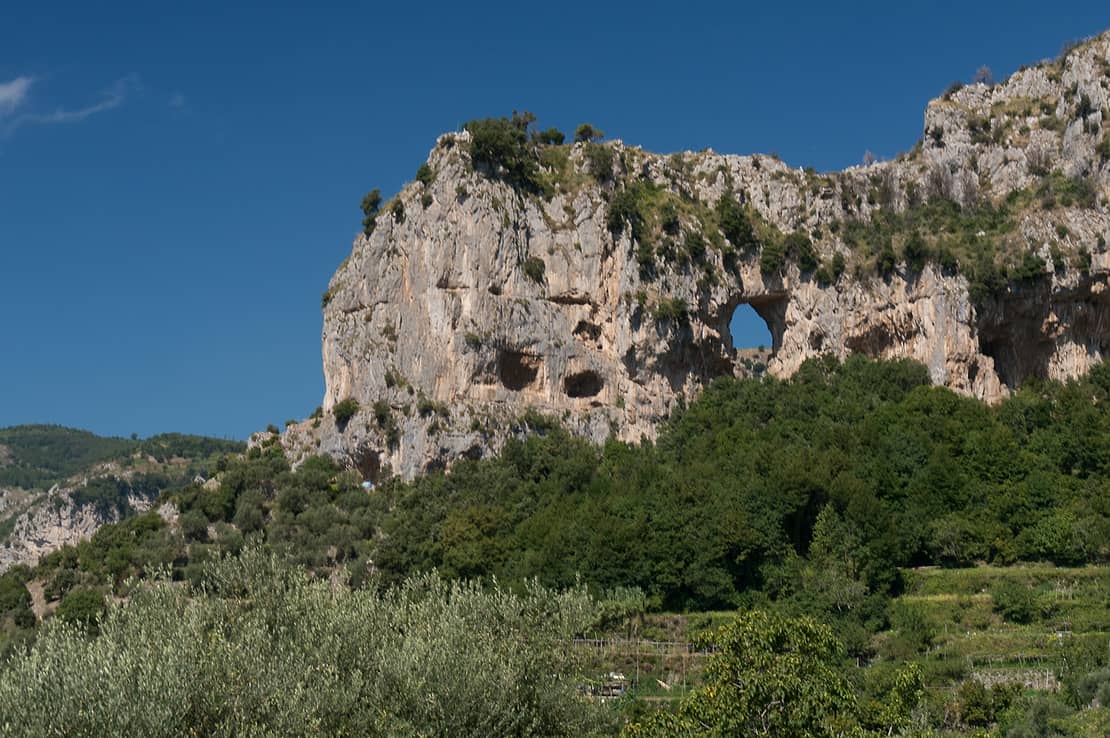 A seemingly endless flight of steps and a small road that winds its way up the hill unite Positano with Montepertuso, in the Monti Lattari. Legend has it that the hole in the mountain was created by the Virgin's index finger. You can get there by the footpath leading to the Oasis of Vallone Porto, which has numerous waterfalls and species of rare plants and animals. One of the Amalfi Coast's most spectacular religious festivals is held here on the 2nd of July in the Church of the Madonna delle Grazie.

Make sure you stop off at the Fontana Vecchia for a glass of wonderfully fresh drinking water.

The hamlet of Nocelle
Just beneath the summit of Montepertuso is the tiny hamlet of Nocelle, a fraction of Positano that until recently could only be reached via a pathway winding its way around the mountain or a flight of 1,500 steps starting on the beach of Arienzo.

Nocelle is at the end of the Sentiero degli Dei, or the Path of the Gods, the mountain trail which traverses the Monti Lattari from Agerola.
One of the most beautiful views on the Amalfi Coast, extending as far as the island of Capri and the Faraglioni rocks, can be seen from the hamlet's main square.

Where to eat in Positano

Where to stay in Positano

Where can I park in Positano?

The only free parking in Positano is located outside the village center in Nocelle and Montepertuso, both set in the hills above town. From here, you can catch a bus to the center of Positano.
There is no free parking in the center of Positano, and most free street parking (marked by white and yellow painted lines) is reserved for residents. There are limited public parking spots along the lanes of the town center (marked by blue painted lines), but they are almost never available in the summer. If you are lucky enough to find a spot along the street, the meter parking rate is EUR 3/hour. The only option that is always available is the paid parking lots. The closest to the pedestrian center of Positano are De Gennaro and Mandara, both of which charge EUR 8 o 10/hour.

When is the best time of year to visit Positano?

Most tourists visit Positano between April and October and the best time to visit is May, June, and September. In low season (from November to March), most hotels are closed. To check average temperatures by month and see what there is to do in Positano each season, see our page here: When to visit the Amalfi Coast

Fishing village set in a peaceful landscape, with craft traditions dating back to the distant past.