How to get to Amalfi

Amalfi is located right in the center of southern Italy's Amalfi Coast (Costiera Amalfitana in Italian) and you can get there by car, ferry, or bus.
Sita buses run regularly to Amalfi from Sorrento and Salerno; in the summer ferry routes connect Amalfi to both Naples and Salerno.

Driving times for day trips from other locations in Campania:

From Capri: 20-minute ferry to Sorrento, then 60 minutes

From Naples: 1 hour 20 minutes (high-speed trains from Rome and Venice arrive at the station here)

From Naples Capodichino Airport (the closest airport to Amalfi with flights from Europe and overseas): about 1 hour 20 minutes

For more detailed directions and information on how to get to Amalfi: How to get to the Amalfi Coast

Italy's oldest maritime republic and symbol of the Amalfi Coast, Amalfi continues to enchant visitors just as it did in the days of the Grand Tour.

Just over three square kilometers of devastatingly beautiful scenery at the mouth of the Valle dei Mulini: this is Amalfi, a town that opens like a fan towards the sea, sheltered from behind by the steep slopes of the Monti Lattari.

Amalfi's ancient Roman origins are evident from a number of ruins, including those of a nymphaeum dating back to the reign of Emperor Tiberius.

Amalfi is the oldest of Italy's four major Maritime Republics and prospered for a full three centuries under the Normans, Longobards, and even the Saracens.

Its decline began in 1137 when it was defeated and pillaged by the rival republic of Pisa.

"For the people of Amalfi, the day they enter Paradise will be a day much like any other because for them paradise is already here on earth, right on their doorstep."
(Inscription on the gates to the town)

The history of Amalfi has been shaped by the town's extensive commercial relations throughout the Mediterranean and the great technical and scientific prowess of its citizens, such as the Amalfi-born Flavio Gioia, attributed with the invention of the nautical compass.

Then there are the Tavole Amalfitane, which for centuries represented the maritime code in the Mediterranean.

When, in the mid-1800s, Prince Ferdinand of Bourbon built the coastal road between Vietri sul Mare and Positano, allowing easier access to this beautiful stretch of Italian coast, the town's mild climate and beautiful architecture made Amalfi an obligatory stop on the Grand Tour. 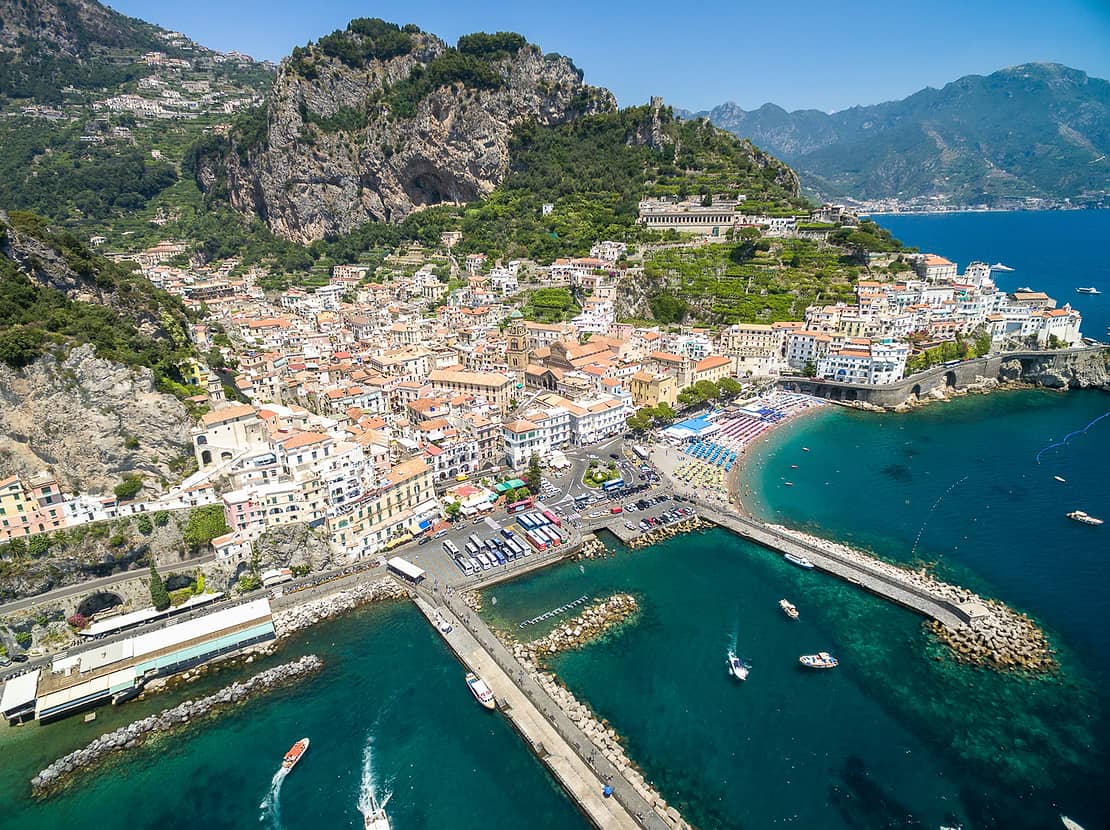 Today, traveling to Amalfi over land or sea is still an unforgettable experience.

Quintessentially Mediterranean, Amalfi's townscape is comprised of a cluster of little white houses interspersed with narrow alleyways and shady porticoes. It's guarded by watchtowers such as the Torre Saracena, close to the Convent of San Francesco.
Multi-Day Tour packages of the Amalfi Coast

Things to see and do in Amalfi Town:

The Amalfi cathedral and the ancient arsenals 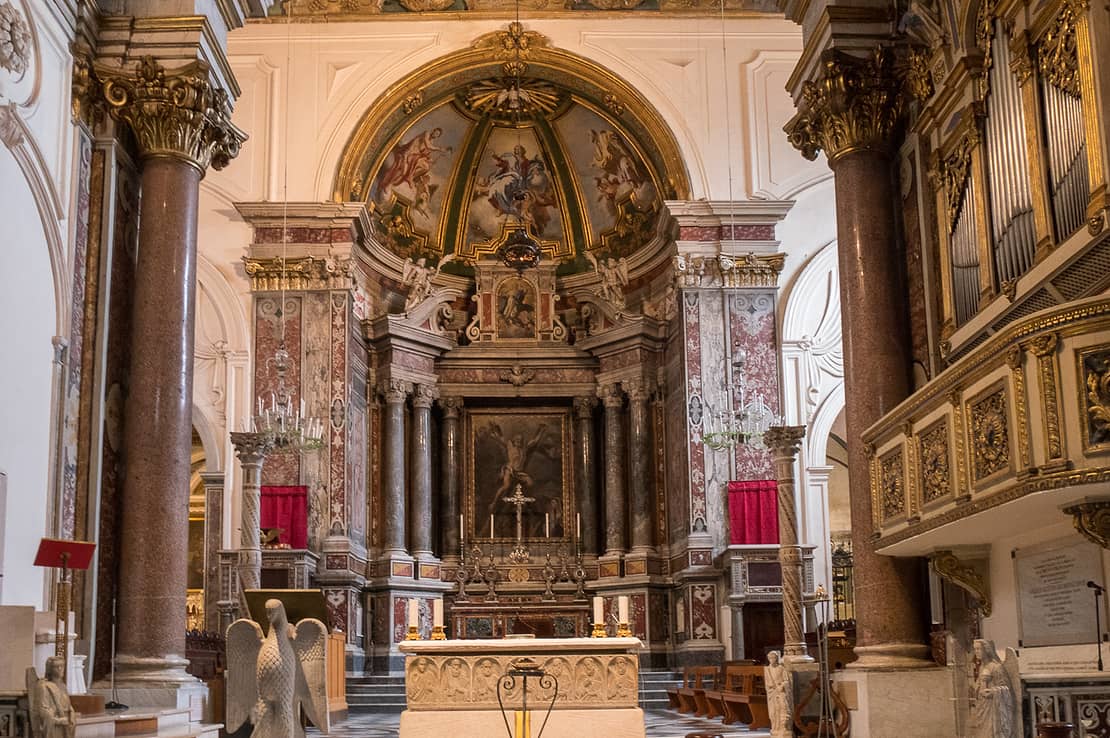 The town's main landmark is the Duomo, or cathedral. Begun in the 9th century and altered over time with Arab-Norman, Gothic, Renaissance, and Baroque elements, the church is preceded by an impressive flight of 62 steps and towers over Amalfi's main piazza.

The multi-colored facade was completely rebuilt in the 19th century after the original collapsed. Work on the majolica-faced bell tower was completed in 1276. The interior is a magnificent display of Italian baroque art and silver masonry.

A bronze statue of Sant Andrea dominates the altar and protects the reliquary urn associated with the miraculous appearance of the manna, which the people of Amalfi commemorate each November 27th.

From inside the cathedral, visitors gain access to the first Duomo of Amalfi, now called the Basilica del Crocifisso, and to the splendid Moorish-style Cloister of Paradise (Chiostro del Paradiso). The cloister was built in the 13th century as a cemetery where the town's most illustrious citizens were laid to rest.

Beware: if you are superstitious, don't climb up the steps of this storied Amalfi church hand-in-hand with your loved one! According to local legend, couples who do so will never get married.

Beyond the Piazza del Duomo, at the center of which the 18th-century Fontana del Popolo takes pride of place, visitors reach what remains of the ancient arsenals where the marine republic's warships were once constructed.

Just a few steps away there is the pretty little Piazzetta dei Dogi, lined with traditional shops.

In the vicinity of what was once called the Vallenula—the old western gateway to the city—is the 10th-century Church of San Biagio, which is famous for its exquisite late 18th-century majolica floor.

Walks in and around Amalfi: 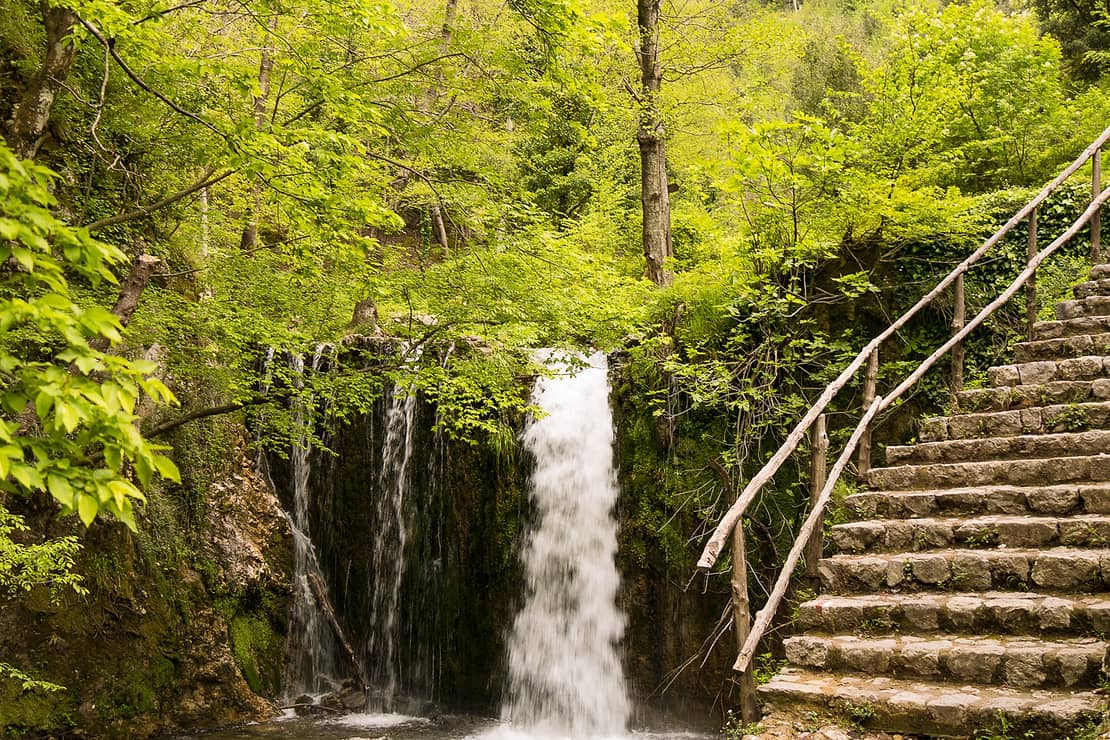 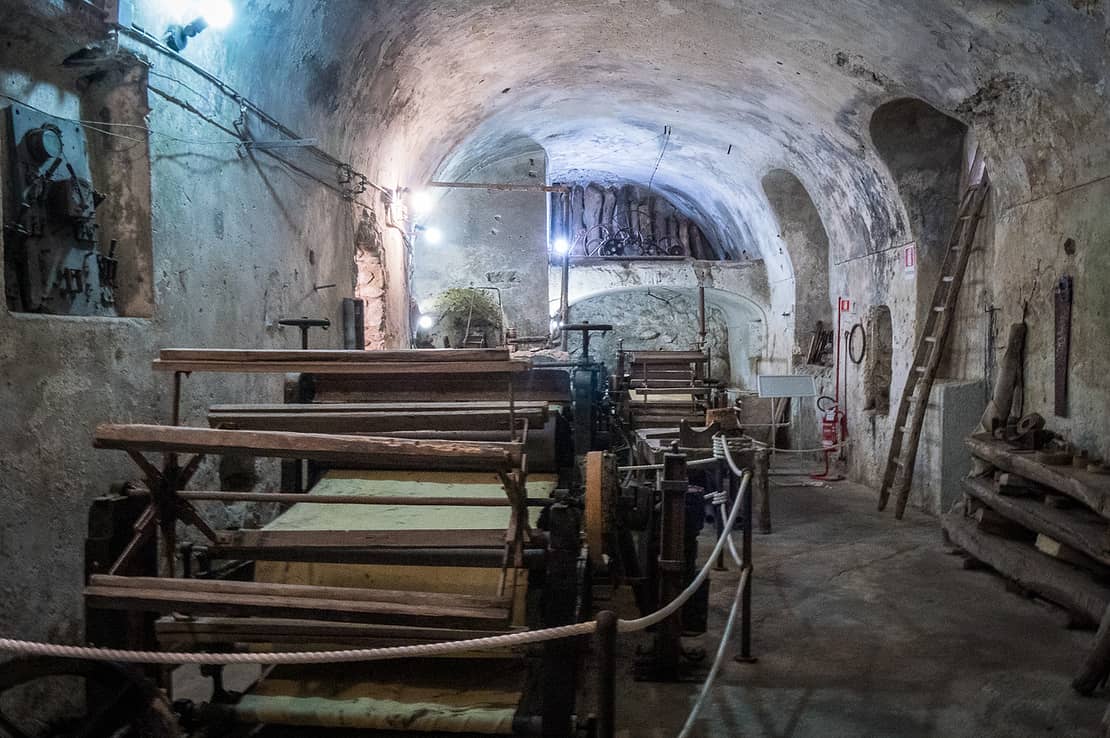 No visit to Amalfi can be considered complete without having enjoyed a stroll through the town's labyrinth of little lanes and alleyways and a trip to the Paper Museum at Via delle Cartiere 24 in the historic Cartiera Milano.

The production of hand-crafted paper, known as bambagina, is one of the oldest of Amalfi's traditions and today remains part of the town's culture and identity.

Those looking to purchase a few sheaves of the paper can do so in the 500-year-old Cartiera Amatuda, close to the Canneto river in the Valle dei Mulini.

Amalfi: at the heart of the UNESCO World Heritage coastline

Since Amalfi marks the center point of the larger Amalfi Coast UNESCO World Heritage Site, it's a great base for sightseeing in the many small towns and hidden gems along the coast.

Things to see and do near Amalfi: 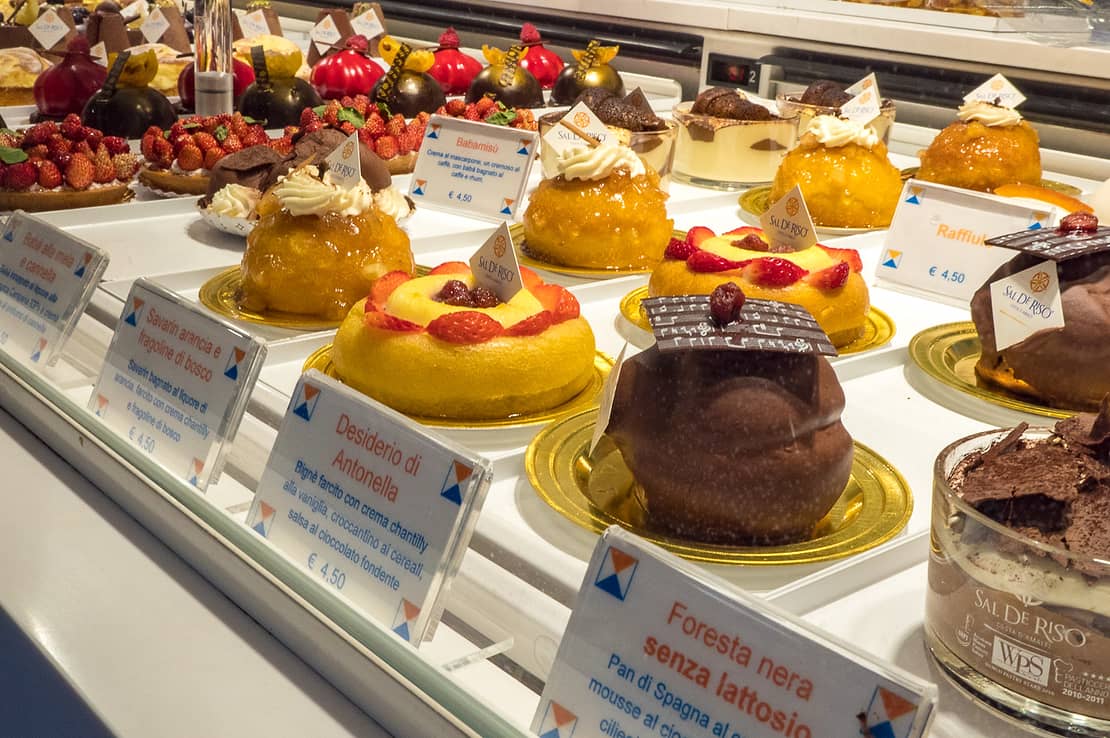 Where to eat in Amalfi

For a seafood meal on the water, we suggest the terrace tables at Lido Azzurro located right on Amalfi's port.

For a beachfront aperitivo, head to Duoglio and grab a table at I Due Scugnizzi or Lido degli Artisti.

Where to stay in Amalfi

Amalfi is home to a wide variety of hotels suitable to any travel style or budget, though the town is not generally considered a budget travel destination.

B&B Le Palme is an informal inn with rustic décor, two restaurants, and a pool overlooking the Amalfi Coast.

A unique and striking hotel, the Grand Hotel Convento is a five-star retreat built in a historic convent with a gorgeous infinity pool and Mediterranean architecture with Arabic flair.

Amalfi is located in the center of the Amalfi Coast, 60 kilometers south of Naples and 20 kilometers west of Salerno.

What airport is closest to Amalfi and Positano?

The closest airport to the Amalfi Coast is the Naples Capodichino airport, located about 60 kilometers away. There is no direct public transportation between the airport and the towns along the Amalfi Coast. You can take the bus or train to Sorrento or Salerno and then transfer to the local Amalfi Coast bus line or book a stress-free private transfer.

How do I get from to Amalfi from Positano?

The local Sita bus runs every 30 minutes between Positano and Amalfi. The trip takes about 40 minutes. There are also convenient ferry routes from April to October that arrive and depart from the Spiaggia Grande in Positano.

Where can I park in Amalfi?

The large Luna Rossa parking garage is set between Amalfi and Atrani, carved directly into the cliff face with a tunnel that leads to Amalfi on one side and Atrani on the other. It costs EUR 3/hour. In Atrani, there is paid street parking near the beach (blue painted lines) for EUR 2.50/hour. In Amalfi, you can park inside the port area in Piazza Flavio Gioia for EUR 3/hour.

Tickets: from EUR 4.50. Available on the official web site

Explore the smallest village in Italy just steps from the bustling town of Amalfi.

The most beautiful view on the entire Amalfi Coast, and a treasure trove of art and culture.

Village with a wealth of craft traditions, characteristic architecture, and a small beach.

An enchanting coastal village, much loved by in-the-know visitors.

The largest beach of the Amalfi Coast and centuries of art works.