Flavors and aromas of the Amalfi Coast

Get from Naples to Amalfi or Nerano (Marina Del Cantone), safe and stress-free with a luxury...

Pompeii plus Wine and Food Tasting

Dedicate a day to history and cuisine with this driving tour that includes a stop at the ruins...

Flavors and aromas of the Amalfi Coast

A cuisine abundant in fish, seafood and fruit and vegetables ripened to perfection in the Mediterranean sun; but which will also appeal to meat eaters and cheese lovers, thanks to the protein-packed delicacies produced in the Lattari mountains.

Fruit the color of the sun

Lemons are as much part of the landscapes of the Amalfi Coast as the precipitous, cliff edge terraces, or "gardens", as they are called here, on which they grow. These magnificent golden fruits are used in any number of local recipes, from the world famous limoncello and delizie al limone to lesser known delicacies such as ricotta filled ravioli sprinkled with grated lemon peel and mozzarella, smoked between lemon leaves.

When not on your plate or in your glass, you'll find the Amalfi Coast's much-loved citrus fruit on postcards, posters, t-shirts, aprons and in a vast range of perfumes, face creams and soaps.Ovale di Sorrento and Sfusato Costa di Amalfi are the names of the Amalfi Coast's two Igp lemon varieties, both of which are cultivated on the terraces, supported by chestnut wood poles, and shaded by traditional "pagliarelle" which simultaneously protect the fruits from the elements and delay ripening.

Although the lemon has been present in the area since Ancient Roman times it was under the Arab dominion, when the vitamin c-rich fruit's power to combat scurvy was first discovered, that its cultivation was intensified.

Artisan companies which make products using the areas lemons include the Cooperativa Cata, in via delle Cartiere 55-57 ad Amalfi, which is responsible for the exquisite Valle dei Mulini limoncello . Customers have the opportunity to visit one of the firms lemon groves and a Museum containing a fascinating collection of antique farming equipment and documents regarding the areas age-old rural traditions.

Another excellent limoncello is produced by Fratelli Cobalto and sold in the Antichi Sapori d'Amalfi, in via Duomo 39. The shop also stocks the famous "Concerto" liqueur, made following an ancient recipe invented by the areas Cappuccini monks.

The sea on your plate

The Amalfi Coast boasts some of the world's finest fish cuisine.
Shrimps, redfish, pezzogne, bream, sea urchins, octopus, blue fish, molluscs, are the protagonists of unforgettable recipes such as "scialatielli ai frutti di mare", a dish made with sea food and the fresh pasta typical of the Amalfi Coast.
The humble, yet divine, anchovy, is used to make Cetara's extraordinary Colatura di Alici, a modern version of the ancient Roman "garum".

In the fishing village of Cetara, preparation of the Colatura commences on March 25th with the Festa of the Annunziata and concludes in late July.

The heads and bones of anchovies caught in spring are removed and the remainder left in salted water for 24hrs.
After this first salting, they are placed in wooden casks , and pressed between layers of salt.
The liquid created by the pressing is filtered into glass jars and exposed to the sun, in order to obtain its characteristic amber yellow color and intense aroma.
After a few months, the liquid is finally bottled.
The result is a concentration of the sea, just a few drops of which are sufficient to transform the most simple of pasta dishes in an explosion of flavor.

The perfect place in which to purchase the Colatura is, of course, Cetara and, in particular, the Sapori Cetaresi shop, which Battista Delfino opened in the towns harbor 50 years ago. www.delfinobattistasrl.it

The cheeses of Monte Lattari

The Monti Lattari form the backbone of the Sorrentine peninsula, between the provinces of Naples and Salerno. The mountains were given their name by the Ancient Romans because of the large number of cows and goats reared in the area.

This is the other side of the Amalfi Coast, where a number of small, family-run dairies, located mainly in Agerola and Tramonti, continue the areas cheese making tradition. br /> The ricotta, fiordilatte and provola cheeses produced in the mountain towns are laced with the scent of herbs.

Fresh ricotta is one of the principal ingredients in "ndunderi": a type of gnocchi which UNESCO has declared to be one of the oldest pastas in the world. An exquisite rarity best enjoyed in one of the traditional trattorias in Minori, its birth town.

Cheese lovers will want to taste the Provolone del Monaco, also called mantello or coat, because of its shape, which is similar to that of the coat used by the dairymen to protect them from the cold whilst transporting their wares to Naples.

The Amalfi Coasts talented pastry chefs are the authors of many fabulous recipes for cakes and desserts.

From his pastry shop in Minori, in Piazza Cantilena, (www.salderiso.it) Salvatore De Riso creates tempting treats, which are renowned throughout Italy and the world, such as chocolate coated aubergine, custard filled "aragostelle" pastries, and his legendary hazelnut crumb cake, filled with ricotta and pears.

In Amalfi, sweet toothed holidaymakers should head straight to Pansa, in the central Piazza Duomo, a historic cafe where, amidst the antique mirrors and shelves , theyll find scrumptious Amalfi biscuits and over-sized Zeppole di San Giuseppe.

In Piazza Municipio, Andrea Pansa, who represents the fifth generation of this dynasty of pastry makers, has opened a temple dedicated to chocolate (www.andreapansa.it) in which devoted chocoholics can purchase hand wrapped chocolates, chocolate covered citrus fruits and every type of praline imaginable.

In Positano make sure you pop into La Zagara, in via dei Mulini, (www.lazagara.com), a romantic little shop with terraces surrounded by orange and lemon trees,
in which you can savor a slice of Torta Zagara: a wickedly delicious cake made with chocolate and candied orange.

Pompeii plus Wine and Food Tasting

Food Tour on the Sorrentine Peninsula

Capri and the Amalfi Coast by Lancia Boat (10 mt) 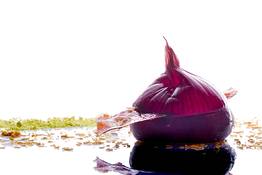 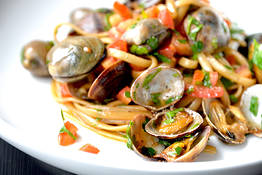 A small town above Positano, setting for a restaurant famous for its authentic Mediterranean cuisine. 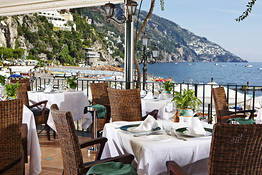 Home-made pasta, fresh fish, and the traditional cuisine of the Amalfi Coast. 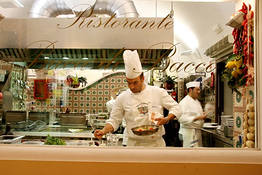 The unmistakable flavors of Positano's legendary tavern; a favorite eatery since the 1950's. 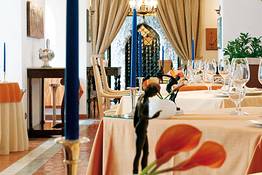 An exclusive location and a 2 Michelin Stars restaurant in which to savor Pino Lavarra's cuisine. Gastronomic traditions and culinary creativity on the Amalfi Coast. 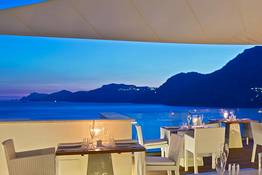 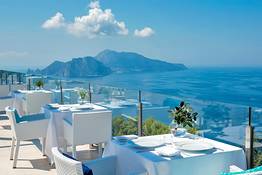 A terrace overlooking the Bay of Naples, where to enjoy Christoph Bob's exciting contemporary cuisine. 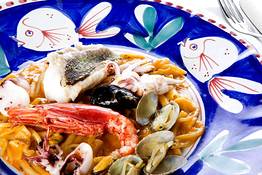 Close to the harbour, a lively trattoria in which to savor the flavors of the Amalfi Coast. 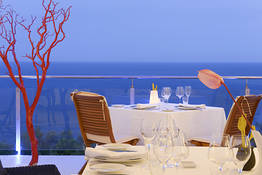 A dream setting for a Michelin Star restaurant and an eating experience to remember. 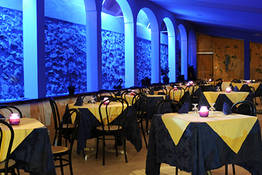 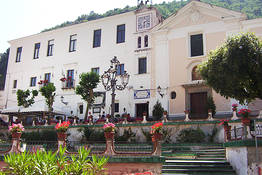 An ancient convent in Cetrara provides the unqiue venue for a fabulous fish feast! 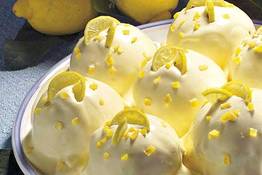 Age old recipes prepared with the ingredients grown in the hills above Furore. 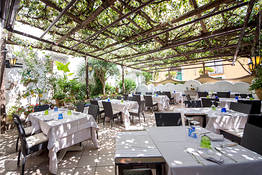 An historic eatery in which to savor the Amalfi Coast's finest home cooking. 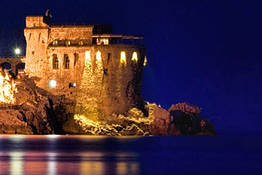 A unqiue eatery, right at the top of an ancient watch tower, directly above the sea. 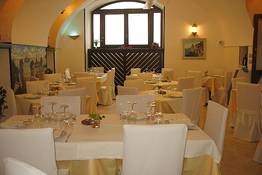 An authentic taste of the sea, courtesy of a historic family of fishermen. 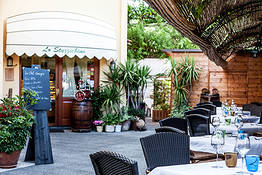 The unforgettable cuisine of the 'Land of Sirens', at an irresistible price. 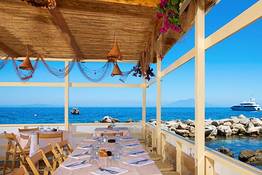 The flavors of the Mediterranean in a one of Capri's historic seaside restaurants. 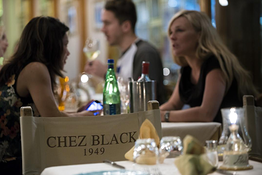 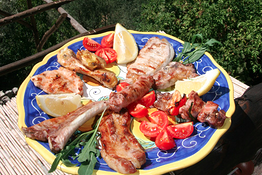 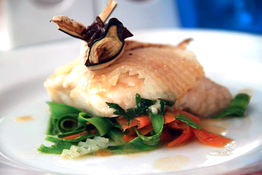 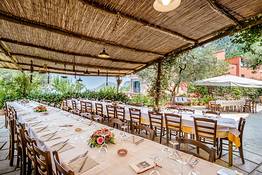 Local products selected personally by us between Sorrento and Positano.