Tour the Mt. Vesuvius National Park with a guided bike tour, summitting the volcano to admire...

Explore some of the most beautiful spots along the Sorrentine Peninsula and enjoy a visit and...

From the town of Maiori an uphill path leads all the way to the summit of Monte Falesia, 800 meters above sea level, and to the Sanctuary of the Madonna dellAvvocata.

Built in 1485, the sanctuary is still venerated by the faithful who, each Monday after Pentecost come here from throughout the Campania region and beyond.

How to get to the Sanctuary of the Madonna dellAvvocata

The path commences with a flight of steps in Via Casale Alto in Maiori. The steps lead up through the vineyards and fruit orchards for circa 30 minutes until reaching the Acqua del Castagno spring.

This is the perfect spot in which to replenish your supply of fresh drinking water before recommencing the ascent. From the spring, the path continues, passing by the Grottone, a cave facing on to an impressive sheer drop.

Legend has it that it was from this cave that the brigand Matteo Salese decided to hurl himself into oblivion rather than be arrested by the gendarmes.

After circa 5 kilometers, the path reaches the Sanctuary dellAvvocata. The complex, comprised of a perimeter wall, convent, small church and wardens lodge, sits on a high plain from where a spectacular view of the Bay of Salerno can be seen.

Via a flight of steps, visitors access the cave where it is said the Madonna appeared before a dozing shepherd, and instructed him to build the sanctuary here.

Apart from the chance to see one of the Amalfi Coasts most breathtaking panoramas, a visit to the sanctuary provides a unique opportunity to observe the areas Mediterranean flora and fauna, and see rare species such as the purple flowered Portensclagiella and, occasionally, a Peregrine falcon.

The festival of the Madonna dell'Avvocata

On the Monday after Pentecost, one of the oldest festivals in the whole of the Campania region is celebrated here.

The pilgrimage to the Madonna dell'Avvocata is held every Monday after Pentecost. Faithful from all over the Campania region climb up to the sanctuary, accompanied by the rhythm of the tammorre (a type of large tambourine, traditionally used in Campanias folk music).

In general, the ascent is made on Sunday evening, or in the early hours of Monday morning, worshippers then camp out on the high grounds until the festivities begin.
At midday the singing and dancing comes to an end and the statue of the Madonna is paraded amongst the spectators under a shower of rose petals. The festival continues until late at night.

Guided Hike of the Path of the Gods from Sorrento

E-bike Tour and Tasting on the Sorrentine Peninsula

Ring Walk on the Slopes of Montepertuso above Positano

Path of the Gods Transfer and Guided Hike 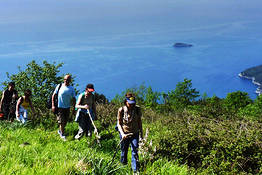 The stunning natural scenery of the Amalfi Coast by walking