Day trips to Capri from Positano and Amalfi

Enjoy a private boat tour of Capri on board a luxury yacht departing from Positano with free...

Seasickness? No Problem with This Private Boat to Capri

Make your trip into the sea an unforgettable day. By renting our boat Aprea 32 with Seakeeper...

Day trips to Capri from Positano and Amalfi

How to Day Trip from the Amalfi Coast to Capri

There are three ways to get to the island of Capri from the Amalfi Coast:

Ferry routes from Positano and Amalfi run from the beginning of April to mid-October. The dates can vary from year to year depending upon the seasonal weather and the date on which Easter falls (which traditionally marks the beginning of the tourist season).

As soon as the ferry companies publish the updated schedules, we post them on this page:

Generally, during the months of April and May there are two ferries which depart each morning from the Amalfi Coast for Capri and two which return in the evening. During June, July and August, a third ferry is scheduled in the morning for Capri and in the afternoon for the return route.

We suggest booking your ferry ticket online, especially if you are travelling during the weekend or the months of July and August...the high speed ferries are not large and can get crowded! You can also purchase your tickets directly at the port a day or two before you plan to visit.

Once you've arrived on Capri, you can visit the island in a day by following this itinerary:
Capri Day Trip - A One Day Itinerary on Capri

Numerous organized group tours of Capri depart from a number of towns along the coast. You can choose between two types of tours:

3 - Rent a Private Boat from Positano to Capri

A private boat rental with a skipper is definitely the most unforgettable way to spend the day discovering Capri.

Departing from Positano (or one of the other towns along the coast), you can stop off the Li Galli islets where it is said that Ulysses met the Sirens for a swim before continuing on to Capri. After a stop under the Faraglioni sea stacks, you can have lunch at a seaside restaurant, visit the famous sea caves, and return by way of Punta Campanella and the Bay of Ieranto.

The cost of renting a boat with a skipper depends on the type of boat, but prices usually begin at EUR 600 for the entire day per boat (not per person).

Even if you have a bit of experience at sea, we do not recommend renting a boat without a skipper as the stretch between the Amalfi Coast and Capri can be choppy and windy, so it's best to know the area well. It's also hard to find a spot to moor your boat if you want to disembark on the island if you don't have a skipper.

You can also reach Capri by ferry and rent a boat directly on the island, leaving more time to visit on land and save a bit in comparison to a private boat rental from Postianto.

Seasickness? No Problem with This Private Boat to Capri

The Amalfi Coast by sea: past and present, history and legend 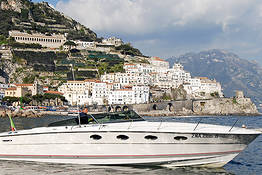 Boats, motoryacht and charter boats to explore the sea of the Amalfi Coast, Sorrento and the Bay of Naples 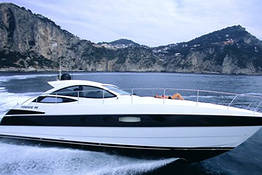 Cruise around the Med on your very own yacht: now that's luxury!

The Amalfi Coast by sea 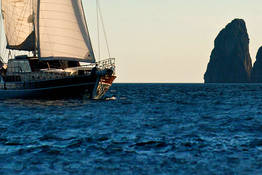 The atmosphere of a five star hotel, aboard a stunning Turkish caique.